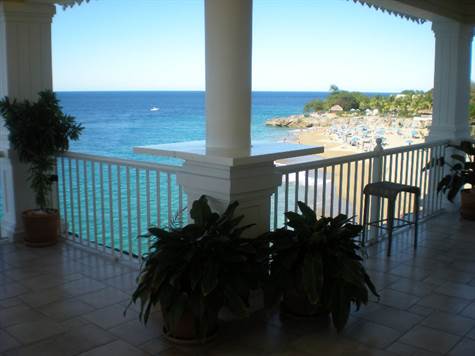 Gorgeous penthouse in one of the most desirable complexes in Sosua, in Victorian style. Direct beach access with pool and jacuzzi overlooking the sea.

The villa has an full equipped kitchen with breakfast bar and open plan living room and dining room. There is a master bedroom with full bathroom and doors leading to the garden and a second guest bedroom. Both bedrooms have air conditioning.

Outside is a gleaming, big private pool with views of lush surroundings, a lawn area and parking space.
Seller has built a big outside living space with BBQ area.
Overall, this is an excellent property which should not stay on the market for long.
For more information:
Piet Schenkels,
www.buyDRproperty.com
e-mail: buyDRproperty@gmail.com
Tel: 849 220 1234 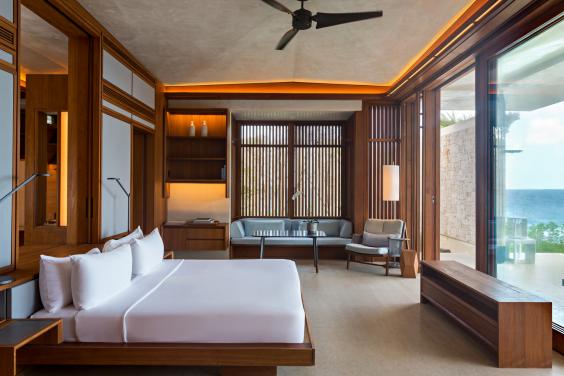 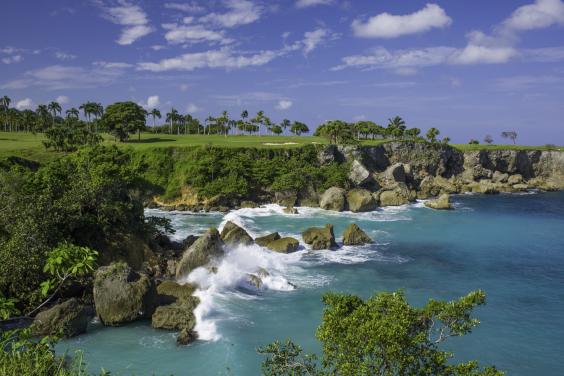 This fantastic villa boasts unmatched ocean views from literally every room and the most wonderfully landscaped and manicured gardens. Completed in July 2008 using only high end finishes, this is a must see for those interested in true luxury.

The fully equipped kitchen will satisfy anyone’s needs with its full scale of appliances including a large stove with a 6 burner gas cook top, dishwasher, extractor, microwave and American brand fridge/freezer. Meals can be enjoyed at an over sized antique dining table in high backed Lord Loom chairs.

There is a splendid living space with all leather seating, a cherry wood salon table, antique sideboard and side table, plus a BOSE surround system setup to play throughout the inside as well as throughout the outside covered terrace space.

The terrace is completely furnished with a teak dining set, lounge sofas and deck chairs. You will find additional deck chairs and tables around the large outdoor pool. Those enjoying the pool have their own shower and bathroom in the pool house for convenience.

All 3 of the bedrooms are beautifully furnished and boast endless ocean views. The master bedroom has an incredible, large bathroom with his and hers sinks and a proper bath tub.

The walk in closet has been custom built using fine cedar.

A separate guest cottage has a kitchen, separate bathroom and bedroom, and has as well fine ocean views.

Gated grounds stretch over the hills with endless views. 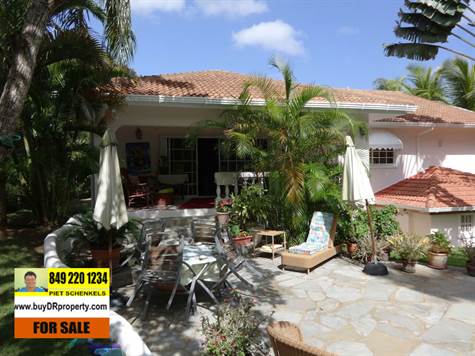 This villa is located in finished part of Residential Casa Linda, just a few minutes drive from Sosua and 10 minutes from Cabarete.
The villa has a large open plan living room with open kitchen. There is one master bedroom and 2 other bedrooms, all with full bathroom and air conditioning. The open plan living room leads to the big terrace where you overlook the beautiful planted garden with a big swimming pool.
In the basement there is an apartment with separate entrance and full bath room.
There is a laundry room and a satellite dish.
Villa comes unfurnished. 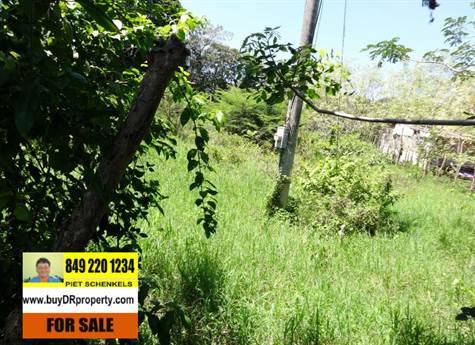 Very nice and large lot for building your home in the Caribbean.
This lot is on the main road of La Mulata, an international community of Sosua.
Now priced to sell, just 25 US$ per square meter.
Electricity on place 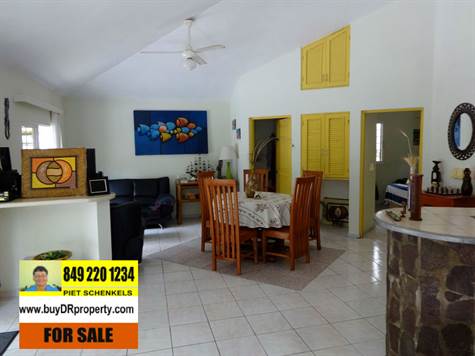 This villa is located in Costa Azul, a gated community close to Cabarete. The house has a nice sized garden with carport and a pool.
he house has 2 bathrooms sharing a full bath room.
The open plan living room / dining room and kitchen are very spacious and light.
There is a guest studio with separate entrance.
This property comes fully furnished and is priced to sell! 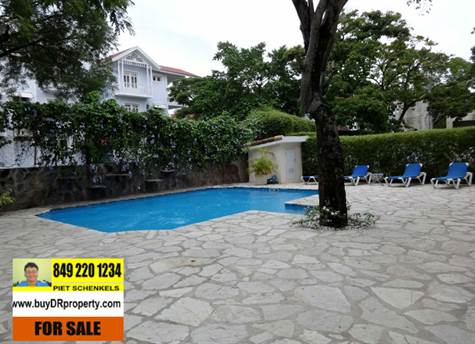 Apartment practically on the beach

This apartment is located just one minute walk from the Alicia beach and a few minutes walk to the Sosua town center.
The apartment has an open plan kitchen / dining room and semi separate living room with half bath room. There is a master bedroom with full bath room. A large terrace overlooks the beautiful pool with garden. there is a parking space and a locker room available. Apartment comes furnished with all appliances and Air conditioning.
Perfect place for some one who wants to be in a quiet place in the center of town and almost right on the beach!
For more information:
Piet Schenkels,
www.buyDRproperty.com
e-mail: buyDRproperty@gmail.com
Tel: 849 220 1234